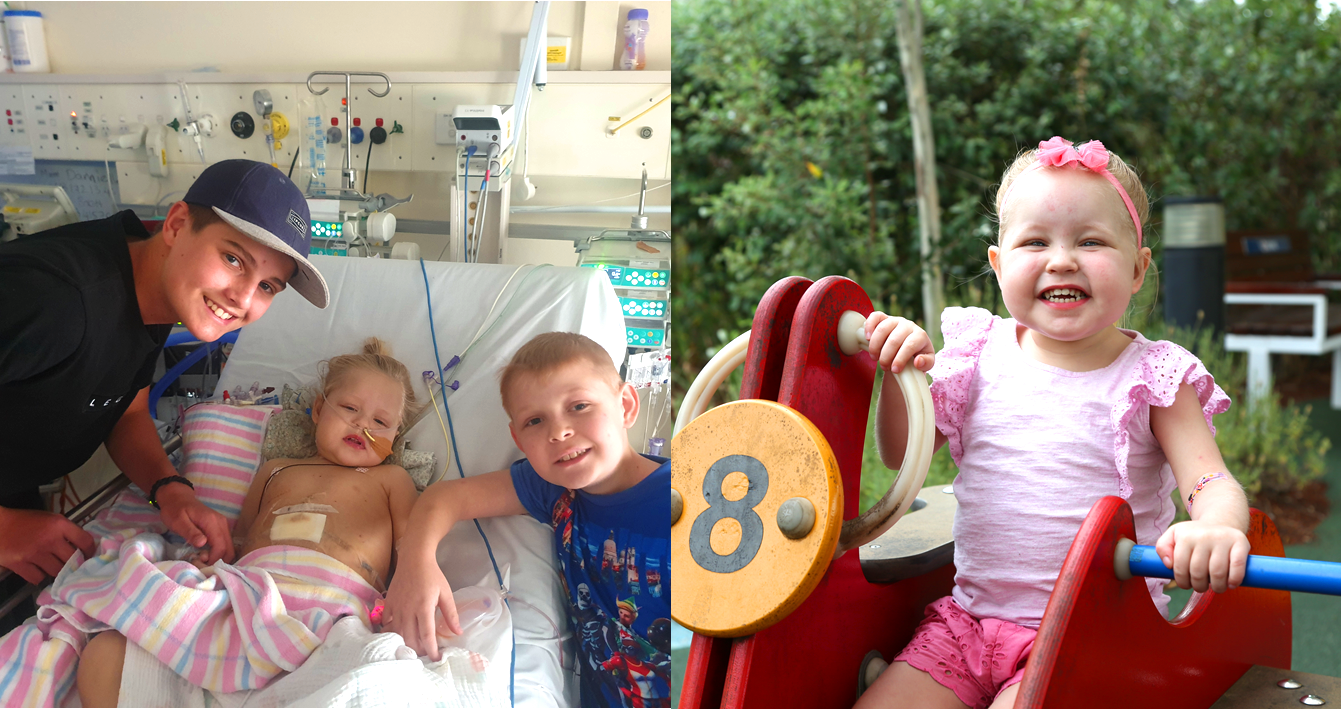 When Ayla was just four weeks old and started constantly vomiting, her parents Brett and Dannielle knew something wasn’t right.

With their guts telling them this was something more serious than a common virus, Brett and Dannielle took their baby to their local hospital in Cobar, who promptly flew Ayla to Dubbo Base Hospital for further tests.

Doctors suspected it may have been Ayla’s liver that was making her so sick.

In the three days that followed Ayla underwent numerous blood tests before being transferred to The Children’s Hospital at Westmead, where she was diagnosed with biliary atresia.

Biliary atresia is a rare disease of the liver that destroys the bile ducts. The disease means that the bile is unable to drain and as a result, builds up in the liver and causes significant damage.

Following her diagnosis in June 2017, the Ayla and her family’s life changed forever.

“We were all confused and scared because we had no idea what the disease was and if our beautiful baby was going to be okay,” mum, Dannielle said.

For most children diagnosed with biliary atresia, surgery is needed immediately to repair the damage caused by the condition or to replace the liver completely but incredibly, Ayla’s body managed to stabilise and her liver continued to work for another two years.

When Ayla became unwell again in late 2019, her parents knew it was time for their little girl to go on the liver transplant list – her liver had done all it could.

With a liver transplant Ayla’s only option, her parents began the anxious wait for the call that would change their lives. Thankfully, this call did come and Ayla received her first liver transplant.

What was hoped to be the start of her new life soon came crashing down though when Ayla’s body rejected the donor liver almost immediately after her transplant.

Ayla needed a second transplant urgently to save her life.

Incredibly, a second liver became available and just four days later, she was undergoing her second transplant, which was a success.

Since her second transplant, Ayla is thriving and is getting back to enjoying her childhood again. She loves to paint and draw, and is a big fan of horses.

Hospital experiences for family’s like Ayla’s can be daunting, particularly when families are seperated, but the support of the community in the Bandaged Bear Appeal helps to ensure they are receiving the very best care and support possible.

“It has been hard with Ayla in hospital because we have had to leave our other three boys at home but having amazing support from the Hospital is what helps us stay positive and we are just amazed at everything they do to ensure we’re not alone,” Dannielle said.

“We feel extremely lucky to have access to some of the best doctors in Australia. They truly do everything they can to help your child,” she said.