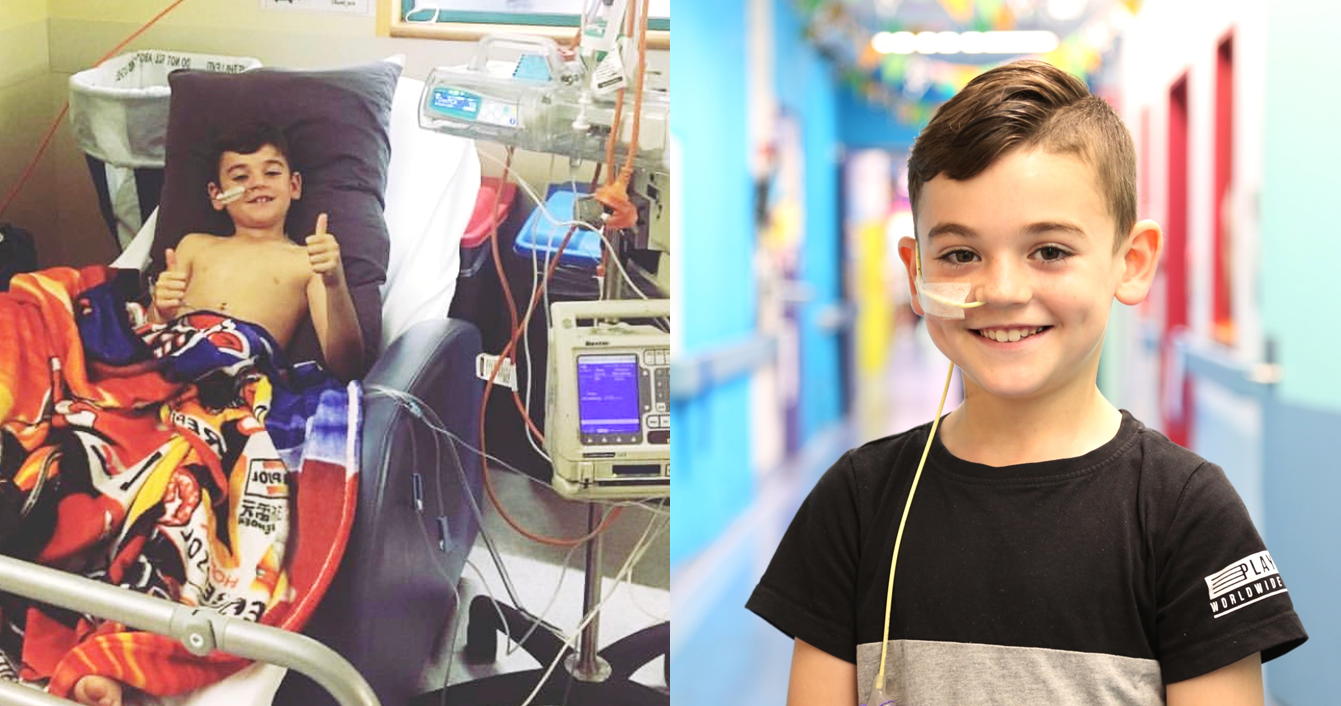 Nine-year-old Blair is happiest when he is riding his motorcycle around his family home in Orange. It’s a hobby he’s had to leave behind though after his life took an unexpected turn and he was admitted to hospital late last year.

Since 2014, Blair has experienced unexplained nausea, malnutrtion, migraines and overall pain, which overtime have increased in both severity and frequency.

Over the years, Blair has undergone ongoing tests to try and diagnose his condition, most without answers, until last year when doctors were finally able to pinpoint some of the causes of his symptoms.

Blair was diagnosed with Malrotation, an abnormality in which the intestine does not form correctly in the abdomen and Gastroparesis, a disease where the stomach cannot empty food normally. He had also developed multiple adhesions in his bowel.

Within 24 hours of Blair’s diagnosis, he was undergoing surgery at The Children’s Hospital at Westmead.

“When we arrived at Westmead, we weren’t sure what Blair’s future would look like and what it meant for the rest of the family,” mum, Caitlin said.

“It was a really scary time especially because there has always been so much uncertainty around his condition.”

Due to the severity of his condition, Blair required feeding via a nasogastric (NG) tube, a special tube that carries food and medicine through the nose to his stomach, while doctors continued their investigations.

With Blair unable to return home, Caitlin and dad, Luke have found themselves juggling other parts of life, which has made times tougher.

“Our lives have taken a huge turn since Blair’s diagnosis,” Caitlin said, “Blair’s dad travels back home every week for work and I’ve had to quit my job. Blair’s brother and sister (Mason, 4 and Jada, 11) have also relocated to Westmead and Jada now attend the Hospital School so she doesn’t fall behind in class.”

While Blair’s condition hasn’t been able to be resolved completely, further surgery has helped to manage his symptoms and he has been able to return home after three months in hospital.

While for Blair and his family the journey ahead is undoubtedly going to be tough, they couldn’t be more grateful for the care and support of the Hospital.

“Despite all the challenges we have faced as a family, we know we are in the right place. Westmead is where the magic happens and is the ultimate place to be when you have a sick child. The resources are second to none,” Caitlin said.

“Everyone involved in Blair’s care are beyond amazing and you can tell they genuinely care about Blair. During such a hard time in your life, you couldn’t ask for much more.”

Help give kids like Blair the best childhood possible by supporting the Bandaged Bear Appeal this March. Find out how.